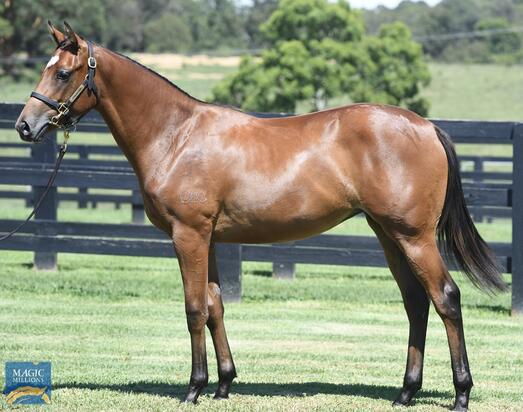 Now offering this outstanding filly by MENARI out of a well related Ocean Park mare. A filly that well and truly ‘fell through the cracks’, she was not missed by Gary Portelli who had a much higher opinion of the filly than her purchase price suggest.

Ocean Park mare LAKE HAYES (NZ) is a half sister to Stakes winners Alcaldesa & Lord Turbo. Alcaldesa and Lord Turbo both won the Listed Wanganui Guineas in New Zealand, with the later also winning as a 2YO. Her Grandam Sitting On A Hill, was also Stakes placed as a two year old. Her pedigree suggest she could make a handy 2YO, who can train on and get over ground as a three year old.

She will be nominated for the Magic Millions race series and Golden Slipper.

This filly will be trainer by Multiple Group One winning trainer, Gary Portelli. Portelli has trained the likes of Golden Slipper winner She Will Reign, Rebel Dane & Gold Trail as well as Elite Thoroughbreds Stakes winners Testashadow, Sebring Sun, Straturbo & I’m All The Talk.

Sale Comments: A lovely filly who could very well go early and train on at three. She walks well and has a lovely temperament. Menari didn’t have too many foals, but the ones we have seen were very impressive, and she was no exception! A perfect proposition for the All Ladies Magic Millions bonus on offer!

Current Status: Currently spelling at GT Park. Will have a short break before going to the educators.