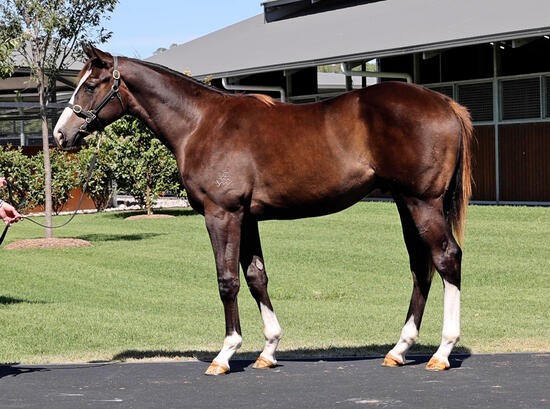 MAURICE is the best Japanese racehorse ever to stand at stud outside Japan. Named his country’s 2015 Horse of the Year, Champion Sprinter & Champion Miler, Maurice was also honoured with a Special JRA Award for his 2016 victories in the Tokyo Tenno Sho G1, Hong Kong Champions Mile G1 & his spectacular swansong, the Longines Hong Kong Cup G1 at Sha Tin.

Maurice retired with a record of 11 wins, six at Group 1 level, including four at 1600 metres, and prizemoney exceeding $12 million. On the 2016 Longines World’s Best Racehorse Rankings he was awarded a figure of 127, placing him fifth overall, and third on turf in the world.

SPORT CHIC was a city winning 2YO by Redoute’s Choice. She has already produced multiple Group 2 performer and city winner, Dealmaker. She hails from a pedigree full of black type and 2YO winners.

He will be nominated for the Inglis race series and Golden Slipper.

This colt will be trainer by Multiple Group One winning trainer, Gary Portelli. Portelli has trained the likes of Golden Slipper winner She Will Reign, Rebel Dane & Gold Trail as well as Elite Thoroughbreds Stakes winners Testashadow, Sebring Sun, Straturbo & I’m All The Talk.

Sale Comments: He was a horse we had our sights set on late in the sale. He had many admirers but we were not coming home without him. A smashing colt that just ticks all of the boxes!

Current Status: He has been broken-in and will return to the stables shortly.